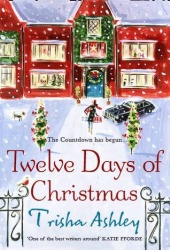 My 2012 reading challenge is now officially underway and
I have just finished my first book 'Twelve Days of Christmas' by Trisha Ashley.

I have to say I really enjoyed reading this book and although it's a Christmas story I would have enjoyed it just as much at any other time of the year.

'Holly Brown is a young widow. It's Christmastime and she's just lost her grandmother who brought her up, as her mother died giving birth to her, at Christmas. A few years ago Holly's husband, Alan, was killed in a tragic accident also around Christmastime and so, understandably, it's not her favourite time of year.

As a professional house-sitter Holly is asked to look after a remote house on the Lancashire moors over the Christmas and New Year period and she agrees to do this as she feels it will get her away from all the festivities. She takes with her the journal that her grandmother had written as a young girl. She feels that there may not be much to do in this isolated property and reading it will give her an insight into her grandmother's early life whilst giving her something to do whilst on her own in the big, lonely old house but of course, things don't always turn out as expected.

Jude Martland owns Old Place, the house Holly has agreed to look after. He has decided that there will be no Martland family Christmas this year after his younger brother, Guy, ran off with his (Jude's) fiancee  last Christmas and so he disappears off abroad leaving his entire family, who normally spend Christmas at Old Place, to fend for themselves. The intention is that he will return by the Twelfth Night to attend the annual historical pageant which takes place in the village of Little Mumming and which the Martland family is obliged to attend, however, when he returns home unexpectedly after hearing that his elderly aunt has had a fall, he finds that somehow Holly, who is also a professional chef, is hosting the very family party that he wanted to avoid at all costs. As the blizzards set in and the whole village is cut off from the rest of civilisation, both Holly and Jude find themselves forced into a situation which neither of them are particularly happy about.'

As I said before, I really enjoyed this story. It's funny, sad, touching and moving in equal parts. The characters are very believable although I do feel that Holly was unnecessarily rude to Jude on many (most) occasions and I'm not sure that people who don't know one another would actually act like that - I certainly wouldn't - but who knows? Maybe some people do behave like that. Anyway, that's only one tiny criticism. Apart from that I loved it!

Other non-human characters included Lady, Merlin and Billy, an old horse, an elderly dog and a billy-goat respectively, all of whom I grew really fond of whilst reading about them. As much of Holly's time at the house is spent cooking there are some fabulous meal ideas throughout and a bunch of great and mouth-watering recipes at the end of the book. I kept picking this book up to read the odd chapter as often as I could as I really wanted to know what was going to happen next and I don't do that with books very often so all in all I would have to say that this was a very entertaining and worthwhile read and I would recommend it highly.

Until the next time,

Angeliki said…
That sounds like a great book. I'll put it in my to-read list. Thanks for the recommendations and best of luck with your book challenge.
8 January 2012 at 02:02

Denise said…
Thanks Angeliki. I really hope you enjoy the book when you get round to reading it. Look out for more recommendations (at least another forty nine of them) throughout the year.

Anne said…
Read this book last year - and loved it too. I do appartment/house sitting for friends when travelling, as their pets need to be looked after... sometimes wish that I could make a living of it.
31 March 2012 at 08:23

Denise said…
Hi Andaje. Like you I loved this book and I really felt I was drawn into the story and that I 'knew' the house and it's characters etc.

Actually, house sitting, looking after pets and cooking for house parties could easily go on to my list of dream jobs.

Maybe you should look into it and see if there's an opening there somewhere for you to do it and earn a living from it.
31 March 2012 at 12:06