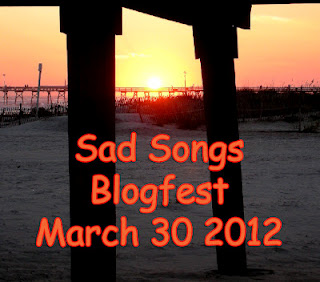 This is the first time I've ever taken part in a Blogfest and it has been great fun! Thank you to Diane for organising it. You can find Diane's blog by clicking here Check out her list of inspirational, sad songs.

I have had a ball going through old cds, trying to pick out my top 10 sad songs that inspire me. I have to admit that I could have come up with way more than 10 but I decided to give myself a limit.

These songs hold no particular memories for me but they are songs that tug at my heart strings every time I hear them and if I'm ever feeling down and wanting to wallow in self-pity, then these are the songs I would put into my playlist and play whilst drinking a bottle glass or two of wine.

Hello by Evanescence. The haunting piano accompaniment and the striking voice of Amy lee make this (in my opinion) one of the most moving songs this band have ever released.

All Out Of Love - Air Supply. I love the chorus of this song!

Against All Odds - Phil Collins. We've all been there...haven't we?

The Bridge - Elton John. Elton John has a real talent for writing songs that tug at the heart strings and this is definitely one of those songs. This song applies to musicians, actors, writers. The choice is yours. Cross the bridge or fade away. Such a talented man!

Last Song - Elton John. This was written in memory of a boy who was lost to AIDS and is about the bond between a father and son. The first time I heard it I cried for days afterwards. The song says it all! I advise you have tissues to hand though.

It Must Have Been Love - Roxette. Another great 80s classic! I saw them live in Edinburgh and was blown away by the sheer power of Marie Fredriksson's voice.

And The Band Played Waltzing Matilda - The Pogues. This may seem like a strange choice but the words of this song are so .poignant. It's about a WW1 veteran and the terrible things that happened to him and how he coped on his return to civilian life. It really brings home what a terrible time they had in the trenches. I think Shane McGowan's raw voice is perfect for this song.

Everybody Hurts - REM. This is the one song that has a really sad memory for me. I was driving along on a sunny day and was stopped by the police. There had been an accident up ahead. Two little girls on ponies had been hit by a truck. Both ponies and one of the little girls had been killed outright. I have my own horses so it affected me quite badly. This was playing on my car stereo when the police stopped me.

Borderline - Chris de Burgh. Another song about The Great War - this time about a soldier leaving his loved ones to go and fight; praying for the day when there are no more borderlines and he can return home safely.

And there you have it - my top 10 inspirational sad songs.

Jeremy [Retro] said…
you had me at air supply... wait the whole list is strong.

I had a great time reminiscing over all these songs.

vic caswell said…
oooh! a couple familiar ones!
i clicked on a link for elton, and hid the window so i could keep listening, and there was a peppy song commercial with a female singer and i was like ????what's up with elton???, until i clicked on it again and realized it was a commercial! teeheehee!
30 March 2012 at 15:53

Tamara Narayan said…
What a bizarre story about the REM story! It's so close to The Horse Whisperer it's eerie.
30 March 2012 at 17:06

L. Diane Wolfe said…
This was the first blogfest I've ever hosted, so thank you for participating.

Denise said…
Karen - thanks. Glad you enjoyed the list. I've heard some great songs today that I haven't heard before when I've been reading the lists. Always nice to hear new stuff.

Vic - these ads are so annoying. I tried to avoid them but some must have sneaked in. Hope you got to hear Elton in the end and it was worth it :-)

Tamara - it was such a sad day and it has stuck with me for many years. I haven't read the Horse Whisperer because I always thought I would get too upset however, if I can read War Horse and survive, I may try The Horse Whisperer next.

Diane - thoroughly enjoyed this! I could have listed other Phil Collins songs too including your choice of Take Me Home. He's such a great artist!
Thanks again!

Clarissa - I loved digging all those songs out and listening to them again. I've really enjoyed this blogfest.
30 March 2012 at 17:54

I only recognize a few of your top ten, but then I've come across a fair number of songs today that I'm hearing for the first time.
30 March 2012 at 19:35

Emily R. King said…
I LOVE Roxette. If I could sing like anyone, it would be her.

Denise said…
Gossip_Grl - thank you. I loved making up this list and it's been great hearing all the new songs on other people's lists too.

J.L. - Like you there have been many songs on people's lists that I've never heard before. It's always great to find new music. Thanks for dropping by.

Hi Emily. Nice to meet you too and thanks for following.
She has got the most amazing voice and I actually love most of their stuff although It Must Have Been Love is definitely my favourite.

Greg H said…
Your number two was my number one (okay I only decided to focus on one song).

Maryannwrites said…
It is really amazing how a song will stick for so many different reasons. Such a sad story about the girls and their ponies.
31 March 2012 at 03:24

Jennie Bailey said…
Fabulous list! Amy Lee's voice is perfectly haunting in Hello! And I can't believe that I forgot the best sad song ever - Everybody Hurts!
31 March 2012 at 07:06

Denise said…
Greg - I should have said but my songs were in no particular order but if they had been then Everybody Hurts would have definitely been my number one song. It's so haunting and descriptive. Such a talented piece of work.

Maryann - I'm always amazed at the powerful emotions That music can trigger; how people only have to hear a few bars of music and in their minds they can be transported back to an event that happened years before whether happy, sad, traumatic...

It was a very sad day and will stay with me for the rest of my life but I also love that song because it's a brilliant piece of writing.

Dawn - thank you. I had the best time ever compiling it. I now have all the songs from my list and some from other lists too in my 'Sad Songs' playlist on my iPod.

Jennie - thanks. Amy's voice is amazing on that track. I love every other Evanescence track too.

Like you, on almost every list I've looked at, there has been at least one song that I wish I had put on my list but I'm keeping a note of them all now just in case there's another Sad Song Blogfest :-))
31 March 2012 at 12:24

JeffO said…
Amy Lee has a terrific voice. And what is it about pianos? There's nothing quite like a piano for melancholy.
31 March 2012 at 13:54

Denise said…
Heather - thanks. I could have had several Dire Straits songs on there. They are such a great band.

N. R. Williams said…
Oh, the story about the little girls and their ponies is sooooo sad. I hate when children are hurt. I can understand how the song has stuck with your ever since.
Nancy
1 April 2012 at 17:36

Denise said…
Nancy - every time I hear it I shed a tear for those little girls and their ponies and I also think about their poor parents.
1 April 2012 at 22:38