April 04, 2012
I thought today we would have something a bit more light-hearted. 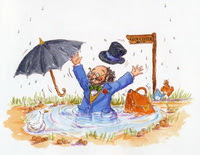 'Doctor Foster
Went to Gloucester
In a shower of rain.
He stepped in a puddle
Right up to his middle
And never went there again'

The origins of this rhyme are reputedly found in the 13th century although the rhyme was probably made up much later.

King Edward I (1239-1307), whose nickname was 'Longshanks' because he was over 6ft tall, had gone on a visit to Gloucester. Whilst he was there he allegedly fell from his horse and landed in a deep, muddy puddle. He was so embarrassed by what had happened that he vowed he would never visit Gloucester ever again!

Clearly they couldn't make up a rhyme about King Edward I falling from his horse as that could have been construed as mild treason so the name Doctor Foster was made up to rhyme with Gloucester.

The rhyme also acts as a warning. Be careful when stepping into puddles. They may look shallow enough but they could in fact be a lot deeper than you expect!

Look forward to your challenge run…
--Damyanti, Co-host A to Z Challenge April 2012

Daisy Carter said…
Yes, and be careful driving through puddles, too! I once drove through a seemingly muddy yet wide 'puddle' on a dirt road and ended up nose-down-bed-up in 8 feet of water!!
4 April 2012 at 16:36

laughing abi said…
Where are you finding all this great info?! Have to admit I've never heard this one but enjoyed the history lesson.
4 April 2012 at 21:16

Anonymous said…
I love the overreaction of kings in stories like this. The puddle ruined his day so he would avoid Gloucester forever! So funny.
4 April 2012 at 22:21

Denise said…
Damyanti - I love it too. It's a great rhyme.

Thanks for dropping by and enjoy the rest of the challenge.

Evelyn - thank you and thanks for dropping by.

Daisy - what a nightmare!! That must have been terrible! I imagine that the car didn't come out of that one too well.

Abi - you have no idea how much useless information is stored in my head but apart from that I've got a great book on the history of the nursery rhyme :-)

Krissyranae - I found it really funny too. You can just imagine him being really angry and storming off home again.
4 April 2012 at 23:08