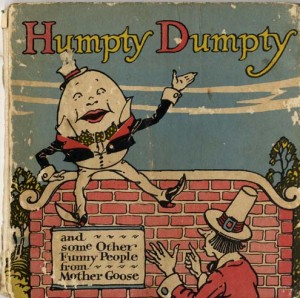 There have been many theories about the history of the nursery rhyme Humpty Dumpty.

In 15th century England, 'humpty dumpty' was the colloquial term for an obese person.

Humpty Dumpty was always portrayed as an egg sitting on a wall and it is believed that this is because it was written as a riddle and children had to guess what he was from the words of the rhyme.

It was widely thought for many, many years that Humpty Dumpty was King Richard III who has been depicted throughout history as having a 'hunched' or 'hump' back. He was defeated at Bosworth Field in 1485 despite having an enormous army behind him but no further evidence can be found to prove this link and so it has now been discounted.


Here is a slightly older version:


It is now widely believed that 'Humpty Dumpty' was in fact a huge cannon used to defend the town of Colchester during the English Civil War (1642-1649). In 1648 the town of Colchester was surrounded by a great wall which protected the town, the castle and several churches. During the Siege of Colchester the cannon, known locally as 'Humpty Dumpty', was placed on the roof of St Mary's church. Cannons are extremely heavy and as this was a particularly large one it would have taken many men to move it around the place.

June 15th 1648 - A large cannon is placed on the roof of the fortified church known as 'St Mary's by the Wall'. It was fired by 'One-Eyed Jack Thomson'. Thomson was a highly experienced gunner and caused much damage to the Parliamentarian forces.

14th/15th July 1648 - Thomson's fire started to draw attention and the Parliamentarians launched an attack on the church roof. At some point during these two days the wall was blown to pieces and  Jack Thomson and his cannon came tumbling down. The Royalists (All the King's Men) attempted to move the now damaged cannon to another part of the wall but were unable to do so because of it's great weight. ('Could not place Humpty as he was before').

On the 28th of August 1648, the Royalists opened the gates of Colchester and surrendered to the Parliamentarians.

There is no knowing whether or not the legend of the cannon Humpty Dumpty is true but it is widely believed to be the most feasible explanation and makes a fantastic story!

S. L. Hennessy said…
I LOVE this rhyme, and ANYTHING Lewis Carroll related. He's just the best, most imaginative writer. I didn't know all that about Humpty though. Great post and happy A-Z blogging!
9 April 2012 at 16:21

Anonymous said…
I have heard the story about King Richard III but not the others. Have you seen the movie "Puss In Boots"? That movie does a hilarious portrayal of Humpty Dumpty. :)
9 April 2012 at 17:30

Unknown said…
I didn't know that! I wonder who first thought the rhyme up - bet they never imagined it would still be going. Imagine old Humpty being a cannon...
9 April 2012 at 19:13

Danielle L Zecher said…
Very interesting! I'd never heard any of that before. Thanks for sharing.

Denise said…
K.S. - I never thought about him being a cannon but you're right - true or not it's a great story!

S.L. - thanks. I was going to mention Lewis Carroll but the post was starting to get a bit long. I love all his work too.

Enjoy the rest of the challenge!

Luana - thanks! It is such a great story and Humpty Dumpty has always been one of my favourites too.

Linda - I haven't seen 'Puss in Boots' yet but it's on my list of films to see. All the more reason now. I love Humpty Dumpty.

Susan - I find it amazing too that these rhymes have lasted so long and that people are still teaching them to children today.

To my mind it makes so much sense now that he should be a cannon.

Jenni Steel said…
You certainly have it in a nutshell with this one.

I have always loved Humpty Dumpty, but I never realised he was a canon either.

Anonymous said…
I'm loving your posts! This is my son's favorite nursery rhyme and we say it all the time. It's fun to know the story behind it. :D