April 14, 2012
'Mary, Mary, quite contrary,
How does your garden grow?
With silver bells and cockle shells,
And pretty maids all in a row.' 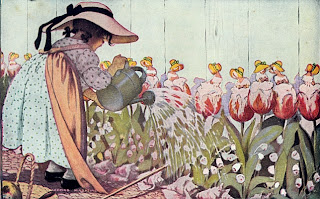 Once again, there are two very different interpretations of the meaning of this nursery rhyme.

'How does your garden grow?' is referring to her reign over the realm. The 'silver bells' are a reference to the sanctus bells and Mary's Catholicism, 'cockle shells' implies that her husband had been unfaithful and the 'pretty maids all in a row' are her ladies in waiting - The Four Maries.

The second interpretation is much more gruesome.

Queen Mary was a staunch Catholic and spent much of her time ordering the execution of those who followed the Protestant faith. The 'garden' is believed to be a reference to the graveyards which grew bigger every day with the number of people that she had executed. 'Silver Bells' and 'Cockle Shells' were colloquialisms for two instruments of torture used around that time and the 'Pretty Maids' referred to a beheading instrument called the Maiden which was a predecessor of the guillotine.

Unfortunately, there is no way of knowing which Mary the rhyme refers to. Some historians and folklorists believe it isn't linked to either of them as the rhyme wasn't published until the 17th century and the above events were much earlier but others are sure that it is linked and are still looking to prove it.

What do you think - Mary, Queen of Scots or Bloody Mary Tudor?

Sharkbytes said…
I'm guessing Bloody Mary. Great theme! I'm trying to visit all the A-Z Challenge Blogs this month. You can see mine at myqualityday.blogspot.com
15 April 2012 at 03:37

Anonymous said…
To me it seems more likely that it is Mary Tudor. The story seems more believable to me.
15 April 2012 at 04:32

Tina said…
EEEwww...I have heard that these early nursery rhymes represented real events, but I've never heard either of these stories. I guess I'll go with Bloody Mary since it's a favorite drink ;-)
Tina @ Life is Good
Co-Host of the April A to Z Challenge
Twitter: @AprilA2Z #atozchallenge
16 April 2012 at 05:52

Denise said…
Pauleen - thanks. It's amazing how many seemingly innocent nursery rhymes do have gruesome roots and yes, this one in particular!

Hi Sharkbytes and thanks for stopping by. I would go with that one too.

Hope you're enjoying the challenge.

Krissyranae - that's the one I would go with too!

Sylvia - thanks for following. It's a marathon in itself trying to get round all the blogs.

Hope you're enjoying the challenge.

Tina - that's a good enough reason for me to go with Bloody Mary too!