Keep Calm and Carry On!

June 17, 2012
So, who else has been feeling particularly patriotic over the last few weeks?

I certainly have. I was glued to the TV for the whole of the weekend of The Queen's Diamond Jubilee. I stood next to one of the Olympic torch-bearers waving my Union flag as the flame was passed to him by one of the other runners and yesterday (16th June) we had Trooping the Colour to mark the Queen's birthday. I have been in my element for weeks and we've still got the 2012 Olympics to come next month!!

One of the things that I am really loving is the number of products that have been appearing with the message 'Keep Calm and Carry On' and a little picture of a crown above the words. I thought it was all because of the Jubilee celebrations etc. but it appears there's a great story behind it. 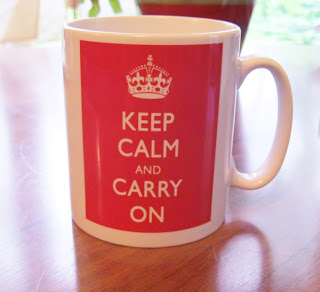 This is actually one of three posters which were produced by the British Government's Ministry of Information, on the eve of WWII in 1939. The other posters read 'Freedom is in Peril' and 'Your Courage, Your Cheerfulness, Your Resolution Will Bring Us Victory'. The little crown at the top is a copy of the commanding seal of King George VI's crown. 2.5 million of the 'Keep Calm and Carry On' posters were printed and were to be distributed should a German invasion be imminent but luckily, the invasion never happened, and the posters were destroyed. Somehow though, a few posters survived and were found in a box of old books which were bought by Stuart Manley, a Northumbrian bookseller. Mr Manley and his wife liked it so  much and found it so reassuring that they had it framed and displayed it in their shop. Customers who came into the shop saw the poster and loved it. The Manleys decided to print off a few posters and things have never been the same since. Since 2001 there have been thousands upon thousands of copies of the poster printed off and the slogan has appeared on mugs, tea-towels, cushions...you name it! Celebrities love it, politicians love it and even the inhabitants of Buckingham Palace are said to be huge fans. It seems to give people a little bit of hope and something to cling on to in a time of great uncertainty and especially a time when the world seems to be in turmoil.

No-one knows who actually designed the poster but how amazing is it that over 70 years later, something as simple as this continues to mean so much to so many people?

You can read the whole story and visit Barter Books by clicking here. Just click on 'Keep Calm' in the left-hand sidebar.

I am now off to buy the poster from Barter Books. I intend to have it framed and hang it in my music studio but whilst I was out shopping yesterday I couldn't resist jumping on the bandwagon. I bought the mug above which is based on the original poster design and I love it but here are a couple of other things that I bought too. 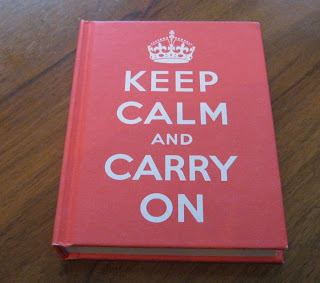 This little book has been filled with famous quotes from Cicero to Churchill and has been written in an attempt to inspire us in these hard times. It's lovely and I will tweet a few of the quotes on Twitter and perhaps put a couple of them on here too.

However, at the other end of the scale there are times when you don't want to keep a 'stiff upper lip' and you just want to get mad at things and so I couldn't resist this other book filled with not quite such positive quotes but very funny all the same. 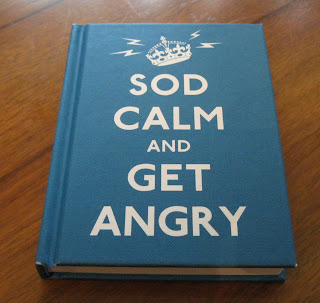 Finally, I couldn't resist this final mug despite the fact that I could actually start an online shop selling mugs. It just seemed so apt for someone who has a blog named 'Cupcakes and Cadenzas' and for a person such as me who is a self-confessed cupcake addict.

KEEP CALM AND CARRY ON 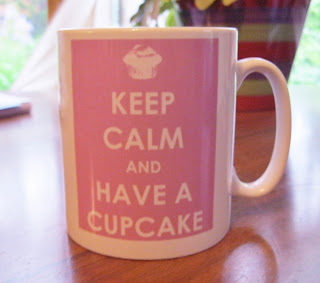 Anonymous said…
I love "Keep Calm and Carry On" and the many takes on it. The "Sod Calm" one is much better than the American version, which uses the "f-bomb" (too crass). I've been looking for a "Keep Calm and Make Coffee" print, though I'm not sure where I'd hang it (I should look for a mug! LOL). And I just pinned a "Yoda" one this morning. :)

Denise said…
Thanks for that Lynn. I'm now following Jennifer's 'Keep Calm' board and all her other ones as well.

I must have been living in another world as all these Keep Calm things have just started filtering through to me even though they've been around for ages.

Susan Flett Swiderski said…
Thanks for visiting my blog today. Before commenting on your most recent post, I have to say something about this one. LOVE it! From start to finish, this is my kinda post. Informative, but it makes me smile, too. Looking forward to seeing what kind of quotes you come up with to share from those books.
11 July 2012 at 13:05

Denise said…
Hi Susan, thanks for dropping by and for your comments.

I'm so glad you liked this post. It's the sort of post I love reading too and it was fun to write.