I don't know if any of you are the same as me but I find choosing perfume really difficult. I never seem to be able to find just the 'right' fragrance. I have accumulated so many bottles of perfume over the years that I could start a shop. I have either bought them for myself, really liking them at the time, only to find that a few days later I really don't care for the smell or it gives me a headache. I also have several bottles that people have given me as gifts and, to be honest, I wish they wouldn't. I don't mean to sound ungrateful but perfume is a very personal thing and I don't think anyone should give anyone else perfume unless they know for a fact that the person really likes a particular fragrance or they already wear it. It's also an expensive gift and for it to lie unused is such a waste of money. For some reason people seem to think I like those 'green' or 'white' perfumes. I don't! I don't mind them on other people but they're not for me so, if anyone reading this wants to send me some perfume, avoid the green and white fragrances. Oh and the very powerful, heavy,musky, sandalwood or vanilla based scents - not for me either.

Anyway, back to my perfume choosing ordeal experience. Firstly I would like to thank the sales assistant, Gillian, who spent over an hour and a half with me and who, I have to say, had the patience of a saint. Her brief was to find me a perfume that was flowery but sweet with a hint of fruitiness and was suitable for both day and evening wear. Throughout her ordeal she kept smiling and chatting away to me despite the fact that it was heading ever closer to closing time. We eventually ended up with eighteen of those little paper strips which they spray the perfume on, each with the name of the perfume written at the bottom. By this time I was starting to feel dizzy with so many different smells but luckily at this point she had run out of options and so we got down to the process of elimination. She didn't flinch once, nor did her expression change when, eventually, I narrowed it down to two. The very first two she showed me! She then gave me a spray of each one on each wrist and told me to go and have a look around whilst they settled. 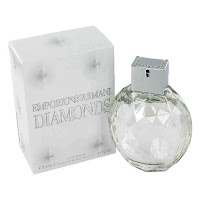 The two I finally narrowed it down to were Diamonds by Emporio Armani and the new fragrance from Jimmy Choo. 'Diamonds' has top notes of rasberry and litchi, middle notes of rose, fresia and lily of the valley and base notes of amber, patchouli and, believe it or not, vanilla. The Jimmy Choo is a much warmer, headier fragrance and eventually I went for 'Diamonds' as I felt the other one was a bit too 'heavy' for day wear. I'm sure Gillian gave a sigh of relief when I went back clutching my debit card in my hand demanding my 'Diamonds' however, the story doesn't end there. Oh no! All the way home in the car I could smell the Jimmy Choo and, despite being quite 'heady' the more it settled, the more I began to like it and so on Saturday I will be making another trip to the shop to buy what will become my 'going out in the evening' perfume. Armani's Diamonds for daytime; Jimmy Choo for nights. 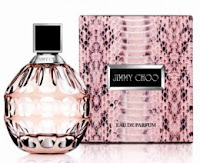 It all seemed a bit of a palaver at the time but it was certainly worth it in the end as I've now found two lovely new fragrances.

Until the next time,